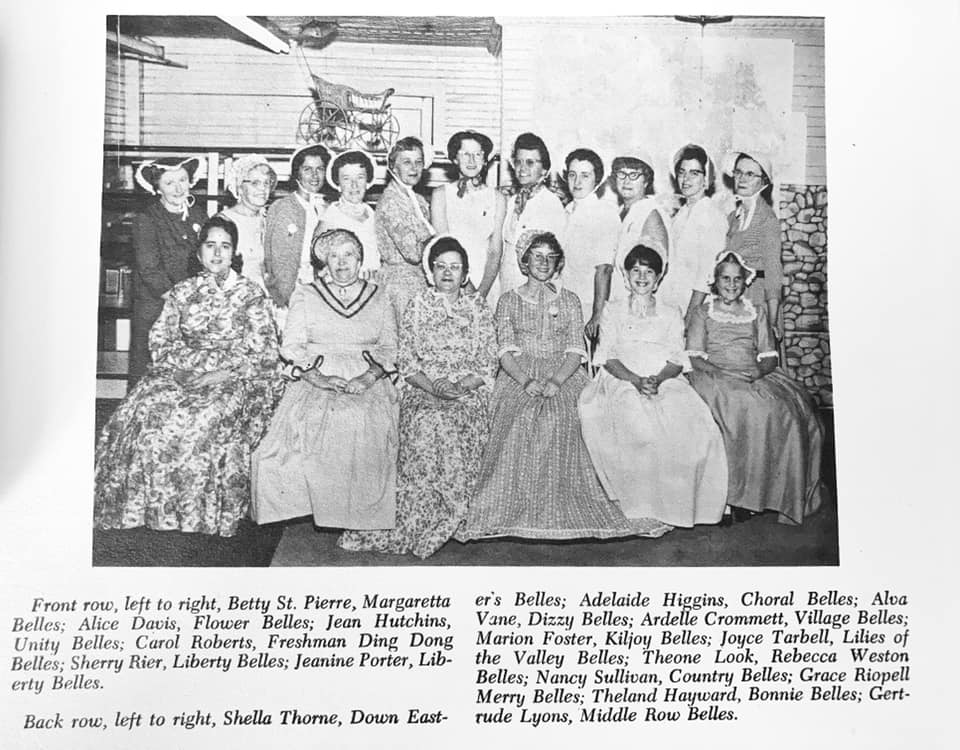 There were so many activities that year! Men grew beards. Men, women and children dressed in colonial attire. I’m sitting in the front row with a wide grin, second from the right. There are so many familiar faces!

I see so many names I recognize. My Mom is in the second row, third from left. She doesn’t look very pleased to be posing! 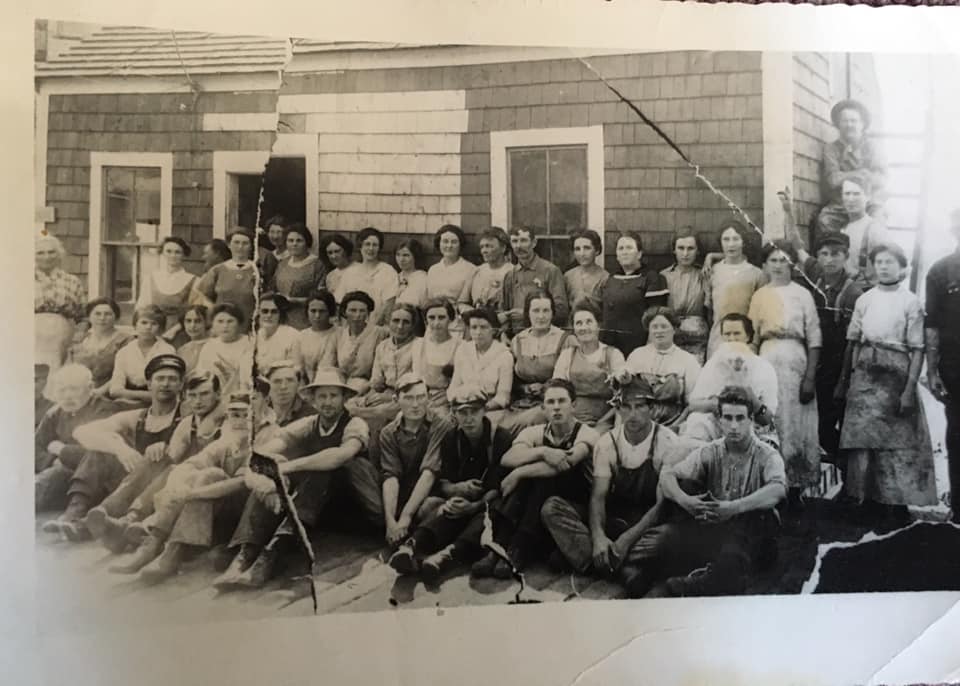 This photo was in my grandmother’s photos. Her name was Lizzie Keegan Rier. She was born in 1892 in Trescott and died in 1985 in Lubec at age 92. She worked in the sardine industry in Lubec from the 1920s to 1980s. Perhaps this photo was taken in the early 1900s judging by the clothing? I can’t see anyone who resembles her. Does anyone know what factory this is or anyone in the photo?

In my grandmother’s younger years, I was told by my Uncle Barney that she worked at the Union Sardine company owned by the McCurdys and her Uncle Thomas Keegan.

Even though I don’t like talking about myself, here’s a story about me.

Tampa Tribune. June 20, 1994. Front page: “Illness Turns Life in New Direction.” It’s a story about a young mother with five children, who lived in Whitneyville, Maine, pursued a Biology degree at University of Maine at Machias, became very ill with a disease called endometriosis, and then found a career in medical research.  To learn more about my career after 1994, click on the “Author” link above.

In my life, the worst of times, led to the best of times. And, I’m proud to be from Downeast Maine. 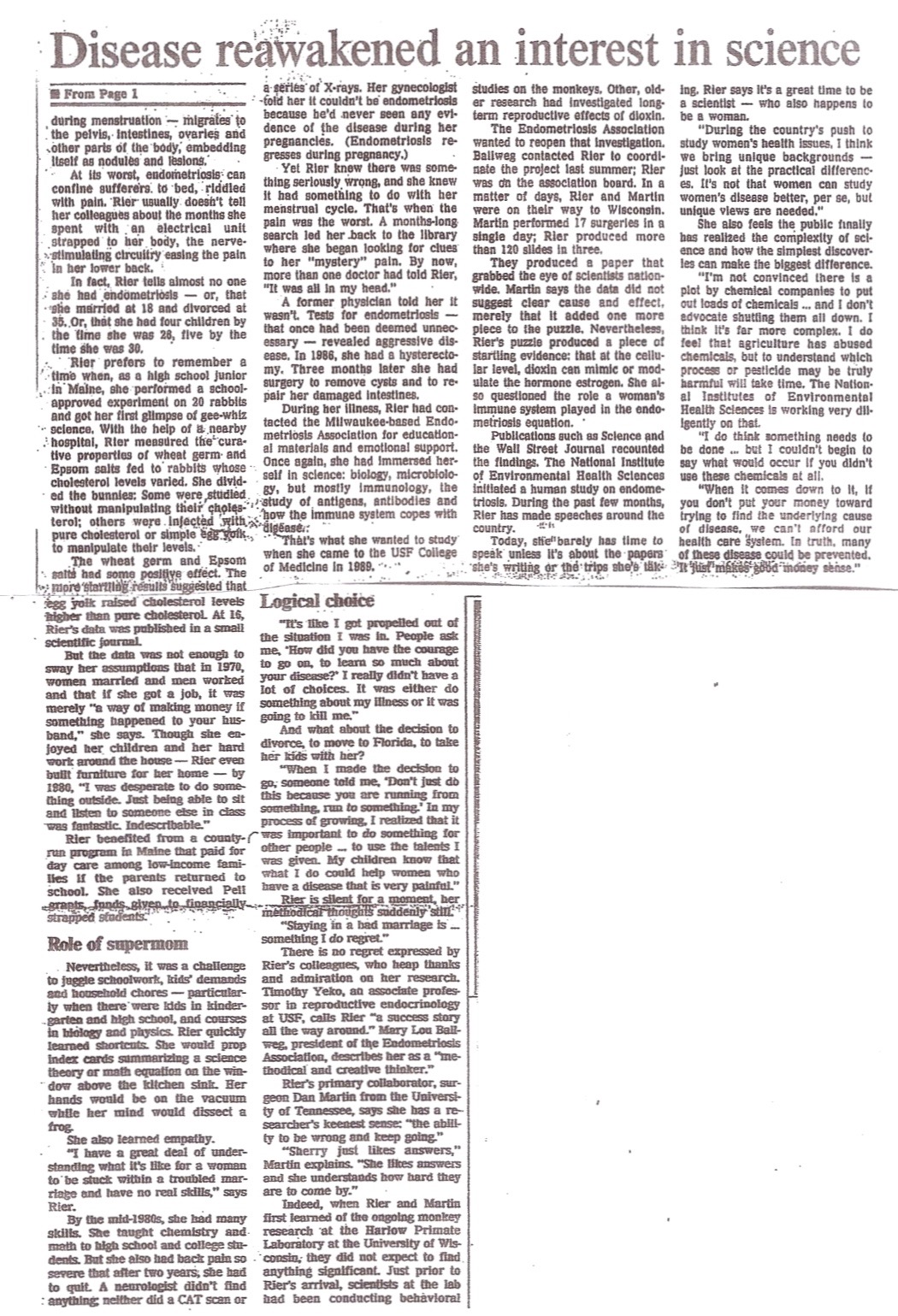 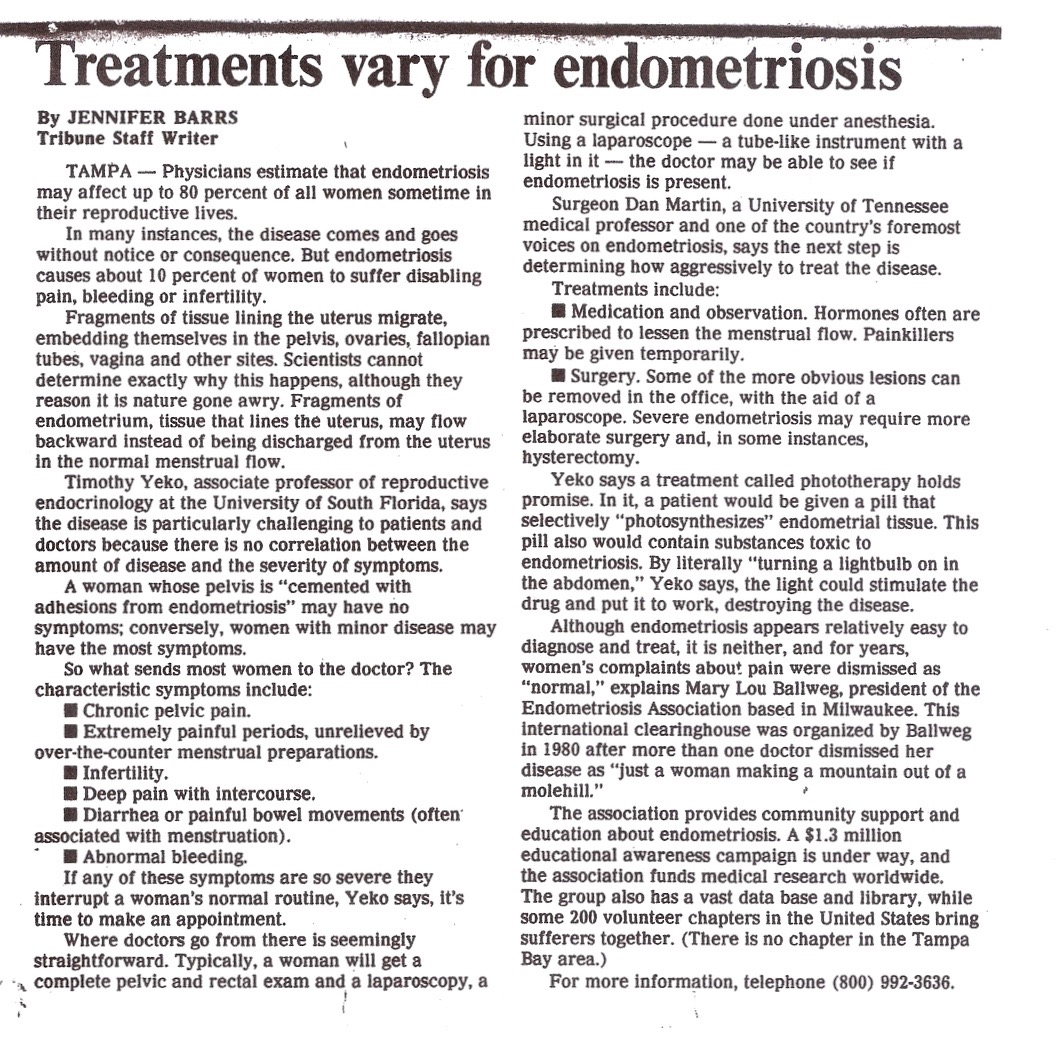 Note: There have been many advances in the diagnosis and treatment of endometriosis since this article was written.

What Will Our Descendants Say About the Earth We Leave Behind? Part II.

Endometriosis: Complete Reference for Taking Charge of Your…

Memorial Day 2019. Thank you Dad, and all Veterans, for your service!

He sent a telegram to my mother, Louise Johnson, announcing his new assignment. They would soon marry and reside at West Point. Dad had undergone basic flight training at Goodfellow Field in San Angelo, Texas, at Parks Air College and was preparing to take his place in the newly expanded US Army Air Corp as a flying second lieutenant.

By June of 1944, West Point had trained hundred of pilots, including the son of Dwight D Eisenhower, supreme commander of Allied Forces in Europe and the sons of other Army Generals.

Today is Easter 2019. Time to reblog this post from last year!

Me and Peter Rabbit many moons ago. I loved the way he liked to lay in my arms on his back. Peter loved to cuddle and he was so soft!

Of course, Easter is not about bunnies. It is a day to renew our hearts and minds and send up prayers into the universe for peace and love in this world.

Me and my brothers. L to R. Jimmy, David and me (Sherry). I have that (red) blanket on my couch! Somehow I look less serious than Jimmy and David… 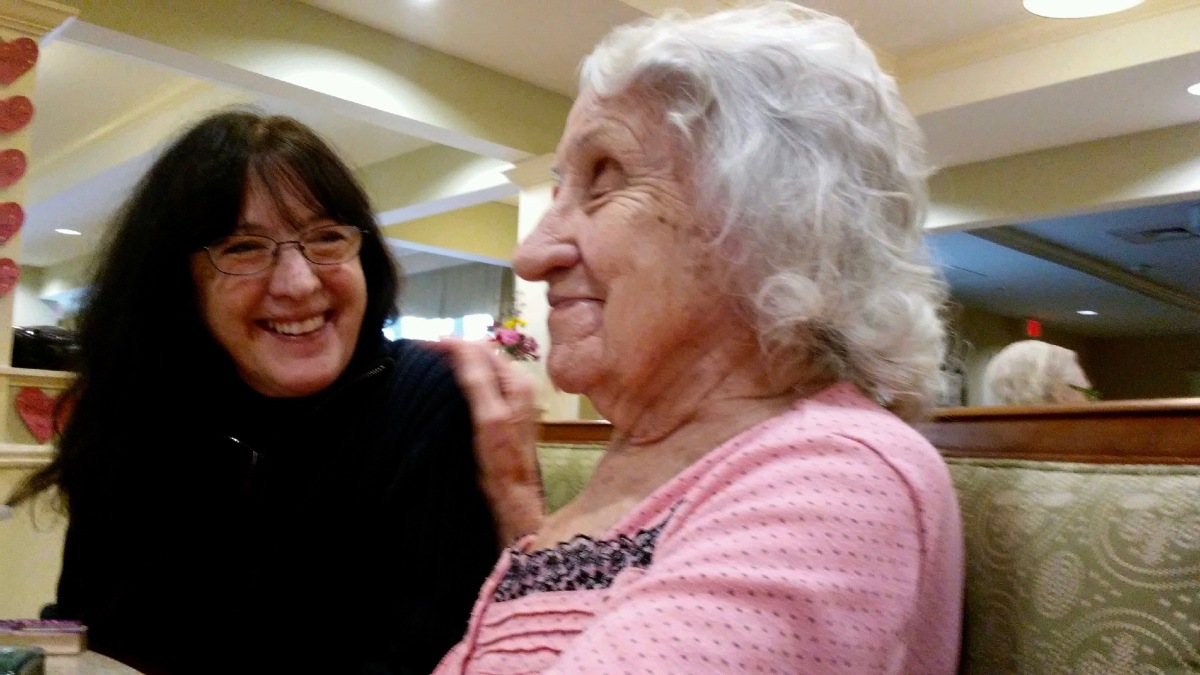 A great lady passed this week. I shall miss her so, but know she is at peace at last. I am grateful to have a lifetime of sweet, happy memories of Muriel and our families having fun together.

my second mother. I’ve known Muriel all my life. She and her husband Phil and their son, David, were always in my life. Phil is gone now, my Mom and Dad gone too, but my memories of our two families together are vivid.

Every summer, our families lived at Indian Lake in Whiting, Maine. We swam, we sailed, we fished, we spent hours/days boating. We started water sports on a surfboard behind the family boat. The first time Dad took me out on the surfboard, I was four or five. Soon after take off, Dad lost his grip on me and I slid between and under his legs into the water.  I remember my surprise to see Dad’s legs fly by. When David and I were eight years old, we learned to water ski. We had to keep up with my older brothers. Soon we were slalom skiing. 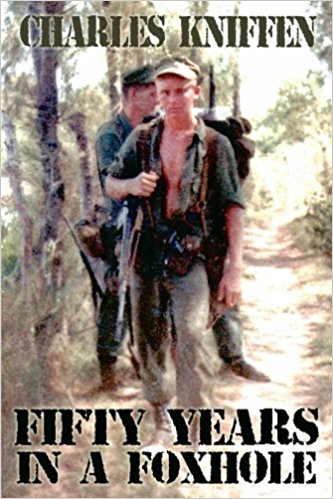 Honoring all Vietnam Veterans on this National Vietnam War Veterans Day. Thank you for your service!

Fifty Years in A Foxhole by Charles Kniffen.

I belong to a writing group in Trescott, Maine, headed by Dr. Michael Brown. We meet at Cobscook Community Learning Center every two weeks. I first met Chuck Kniffen there, a few years back. Soon after he joined the group, Chuck and his wife made a trip to Florida and tented out in driving rain. Chuck had flashbacks on his “vacation.” After returning home, he began to write about his experiences in Vietnam and living with undiagnosed PTSD for most of his life.

His book has just been published. It is riveting. You will cry, you will laugh at Chuck’s unique humor, but most of all you will see with glaring intensity the true cost of war. The story is so relevant to the times we live in. 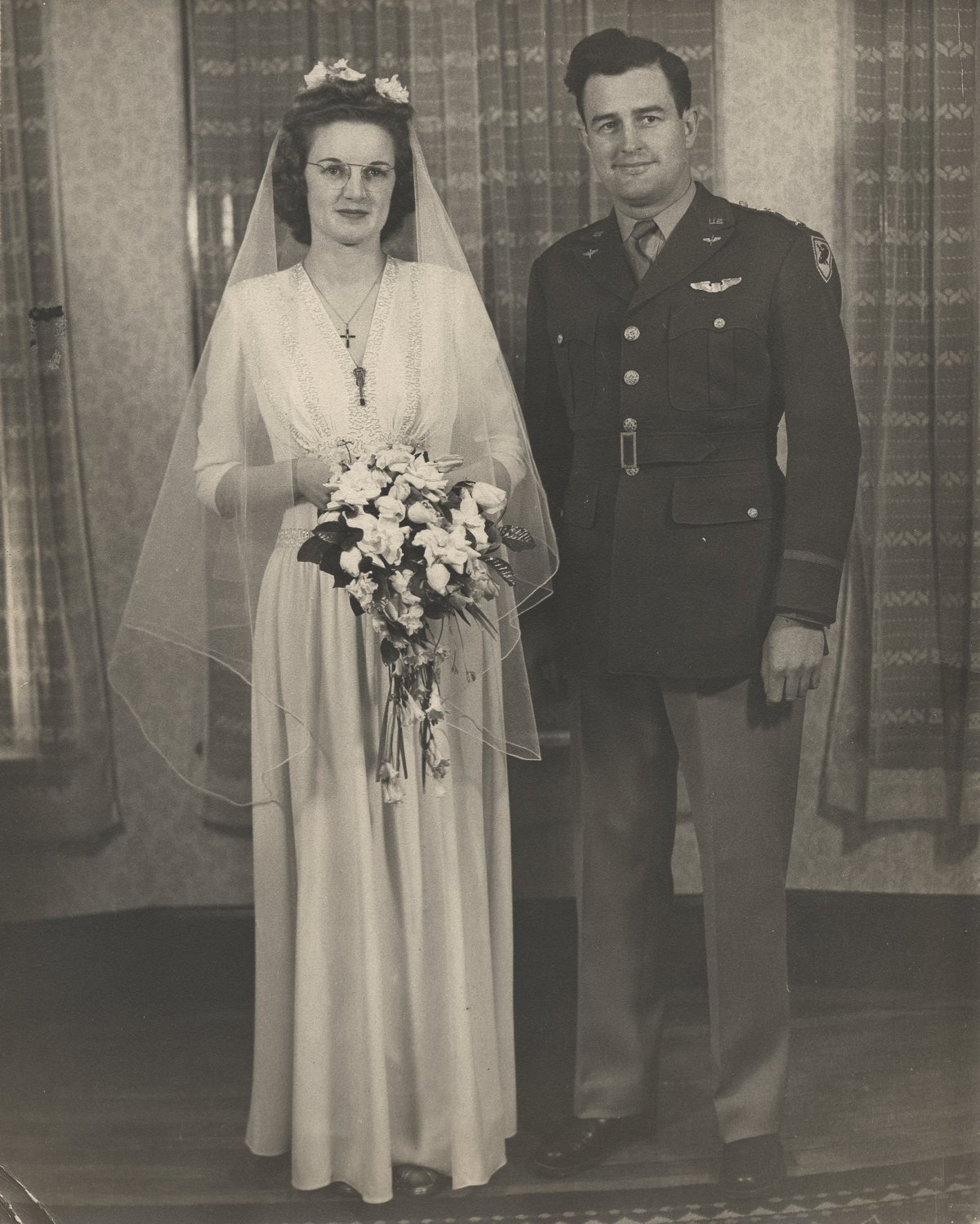 Love and miss you Mom and Dad!

My mother and father, Louise Adele Johnson and James “Gene” Rier, married on February 15th, 1943 at the Saint Patrick’s Catholic Church in Portland, Maine. Their special day was chosen because it was the day that my grandmother Harriet wed Ezekiel Johnson (and eloped) in 1908, and it was birthday of my great grandmother, Nellie Getchell Means, born February 15th, 1857.

Mom lived and worked in Portland at the time. Dad, now Lieutenant Rier, traveled there from Newburgh, NY where he was an engineer and pilot instructor at West Point, Stewart Field Air Force Base. There was a snow storm. Their families from Downeast Maine, Lubec and Machias, had a time making it to the wedding although Dad’s brother, Babe, and Mom’s mother Harriet, did. It was a long rough drive. Dad’s brother Paul, also stationed at West Point as PFC, was his best man. Mom’s maid of…

My mother was born 99 years ago today. She was an adventurer!

The newspaper did not report that Dad took Mom up in the plane that day. But I know he did at least once. Dad said he knew she was a keeper when he turned the plane upside down and she laughed. Mom was always cool as a cucumber in the face of unexpected events.

Interestingly, Dad planned to take Mom up in the plane for a rollover for some time. I present the evidence. He wrote on the back of his picture.

“A snap of me. Do you think I’m getting fat? 177 lbs. I did go 152 lbs. I guess the instrument formation day and night and cross country do me good. The planes will do over 200 and sometime if I ever get the chance I’ll really show you how a stomach can roll.”

Mom never lost the trait of staying calm during an adventure. One day in the…