When I was growing up in Machias, Maine at the house at 24 Broadway, the soap box derby, sponsored by the Bangor Daily News, was a big deal. Hundreds of boys spent weeks building their derby cars, designed to enhance downhill speed. There were discussions among boys and fathers in neighborhoods and yards about lowering wind resistance, the best wheels.

Then one fine June day the entire Eastern Maine community traveled in throngs to the races held at “Derby Downs” in Brewer, crowds lined the road and cheered on family and friends to be first over the finish line.

A view of the race in 1966 featured classmates of mine. 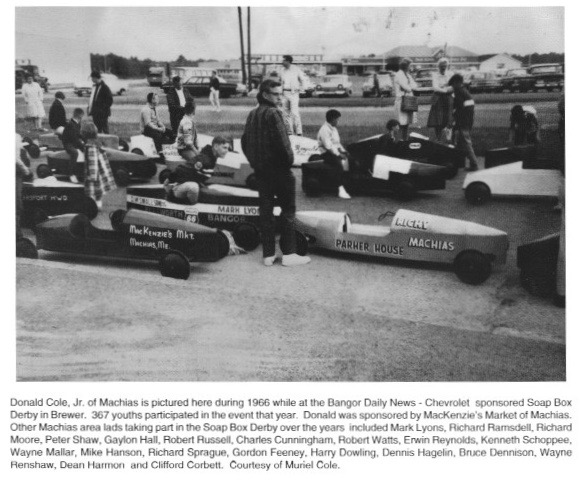 In 1958, I stood with my family and other, rather overly excited, Machias residents close to the finish line. We watched as three soap box cars sped down the hill in the championship finals. Standing in a huddled crowd, fighting to maintain my view (I was only six and not very tall), I watched Jim cross the finish line first. Everyone around me was cheering – or a more apt description is – screaming. Jim went on to win the Class A grand championship. 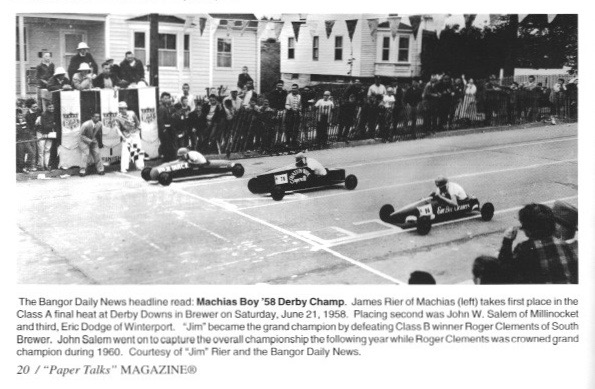 The prizes were way too cool. A bicycle. Best of all, at least for me, a 14-foot aluminum boat that was a fixture of summers on Indian Lake at the family camp. That boat was our joyous transport for decades, not just for boat rides. There was endless fishing, exploration of coves and wetlands, and water sports. I learned to water ski behind that boat when I was eight. There were no other girls on the lake, just my brothers, and the boy next door, another brother David. David and I used to take boat rides down by the lake outlet beach and have contests to see who could catch the most blood suckers on our legs in the shallow water.

I diverge from the soap box derby story. It is enough to say that that prize boat led to years of good times, good memories.

The other prize for Jim was an all expenses paid trip for him and his family to Akron, Ohio for the National Soap Box Derby competition. It was my first experience on an airplane. I’m the little girl in the front of the photo with a big smile clutching a carry-on bag, in vogue for the time. 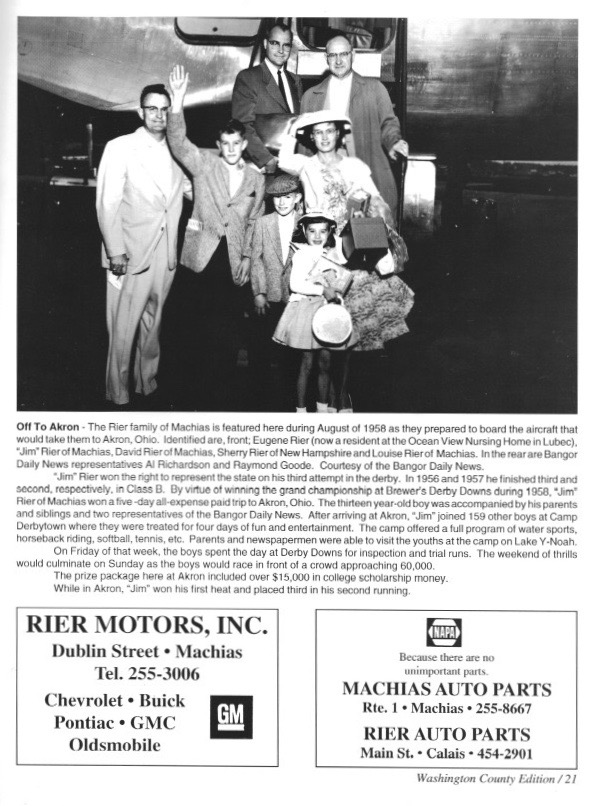 Two reporters from the Bangor Daily News accompanied us to Ohio, pictured at the top of the photo. The man on the right, reporter Raymond Goode, sat beside me on the plane. I remember him vividly. He chatted with me during the trip, easing any fear of airplanes I might have had otherwise. He drew sketches for me and taught me how to draw a cat that I imitated for years.

Jim won his first heat in Akron but lost afterwards. It didn’t matter. It had been a most excellent adventure!

Some photos and descriptions in this post are thanks to the Paper Talks magazine.