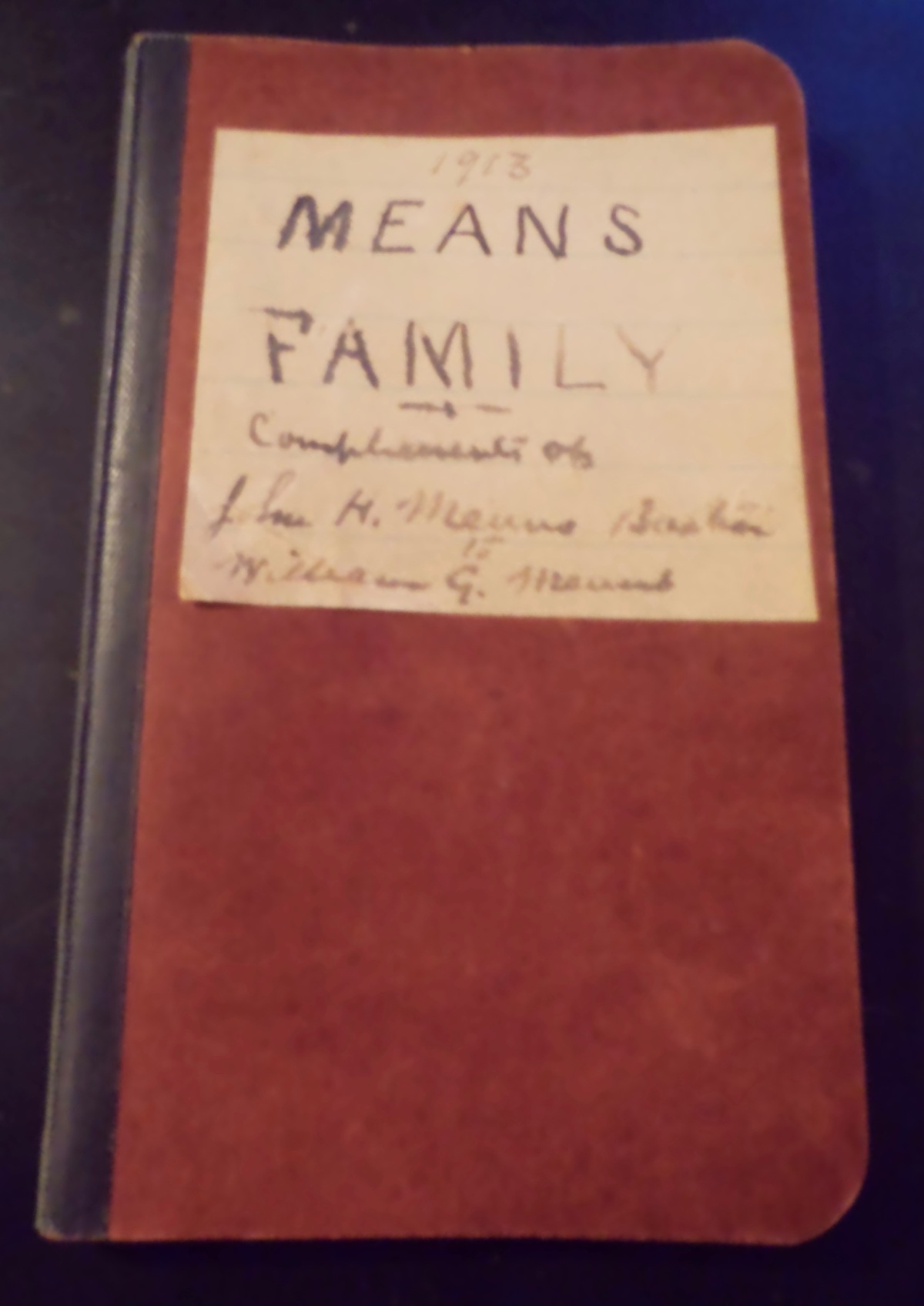 This post has been updated with a full scanned copy of the Means Family notebook found here: 1913.Means

When I was in sixth grade, Mrs. Luce gave the class an assignment: write a story about our ancestors. When I got home that day, I told Mom about my homework project. I hoped to write about my grandparents and great grandparents. She retrieved a small brown notebook from a closet draw entitled 1913. Means Family. Compliments of John H. Means Boston to William G Means. William Means was my great grandfather. I knew the book existed for no one could grow up in my home and not hear stories about my mother’s ancestors but I had never read it, nor glanced at the pages.

I opened the little book and read the first page:

If you look carefully, you will see the sign below the shuttered windows upstairs on the right. Miss Means was my grandmother Harriet Means Johnson. Photo courtesy of Michael Hoyt.

There is a woman in the upstairs windows on the left. She is not my grandmother. I expect the upstairs was divided  – or perhaps she is a parent waiting for a child to finish their piano lesson.

This is the first photograph I have seen of Harriet’s studio in Machias, Maine. Before today, I did not know the location of her studio above the Machias Lumber Company on Main Street. The building is still there.

Harriet studied piano under the renowned Frederick Mariner who had a summer home on the Penobscot River. Mariner’s studio was in NYC but he accepted gifted students at the Bangor Piano School.

Later Harriet moved to Bangor, opened a piano studio there, then eloped with Ezekiel “Zeke” Johnson in February of 1908 – without telling her parents.

Read the Harriet stories, gleaned from her 1908 letters, here.

In Maine, when a man petitioned to join Freemasonry, a three by five membership card was created.  You will find links to the nearly 200,000 cards that record deceased members who joined between 1820 and 1995 at mainemason.org. There are some newspaper clipping obituaries included.

I found my great grandfather William Means Sr. who was initiated August 19, 1878. His eldest son, Otis, was initiated in June of 1906. His youngest son William Jr. (Billy) was initiated in November of 1918. William Sr. and his sons were all members of Lodge 91 in Machias.

Dates of death are included, as well as notations if your ancestor moved to another state.

The cover detail of these albums is intricate. When I first pulled them from a trunk in the attic of my parents ten years ago, I didn’t recognize anyone. I wondered why no one wrote any names in these family albums. Who did they belong to?

I expect the owner/collector of these photos did not envision a time when no one would know the family members in the photos. It was a reminder not to make the same mistake in my lifetime. Have I written on the back of my memorable photos? Rarely. Are photos collected in my lifetime organized? Not yet. I’m working on it.

This year, I open the ancestors’ albums again while sitting in the old rocker my grandmother rocked me in. I gingerly remove the photos to look at the back. There are no names written there; some have the photographer’s stamp. I decide to investigate one album at a time, beginning with the smallest leather-bound one with the clasp, pictured in the front above.

In this album, I find photos of ancestors I now recognize for I have been immersed in them for a time now. The first two photos are of my great-great grandparents, Otis and Elsie Fuller Berry Means by photographer E. Vose in Machias, Maine. The same photos were in the Grace Means’ photo collection sent to the family in 1924. The next two photos are of a young woman that I cannot identify. I turn the page and find my great grandfather William, nearly the same photo is in his autograph book. The photographer was J.M. Goins, South State Street, Chicago. Was William doing business there I wonder?

Most of the album pages are empty, either never filled or distributed among the family. I do not recognize ten of the photos in the album. Are most of these men, women and babies William and his four brothers and sisters at different ages? Perhaps one of the women is William’s eldest sister Harriet, for she was not included in the Grace Means’ photo collection. Whoever she is, she does not resemble William’s other sister, Francis. The photos of this woman were taken in Boston where Harriet lived, as did William’s eldest brother, Andrew Means. I don’t see his two brothers’ likeness in these faces either, Andrew or Eliphalet. But then, I didn’t recognize William’s younger self in the autograph book at first. The elders in the album may be members of the Berry family.

I ask myself questions, think about the research required to find answers. I suppose it will help to just hold each album in my hands and ask whether I have spent enough time with my ancestors to answer these questions.

From the age of my great-great grandparents in the photos, I estimate the date as 1870s. The photographer, Ezekiel Vose, was listed in the 1876 Briggs’ Maine Business Directory. The photo of my great grandfather William is from 1875 or 1876 as the photographer, JM Goins, was located on State Street in Chicago for those two years. William’s age was 20 or 21 years old at the time, as he was born in 1855. The tintype photo of the baby in the carriage could range from 1855 to 1870s. My grandparents, William and Nellie Means were married in 1880. It seems likely that this one album originally belonged to William’s parents, Otis and Elsie Means of Machiasport, Maine and was handed down and stored in the attic where I discovered four old albums over 120 years later.

I’ve explored and documented one album. What might I discover in the other three?

Photos that I cannot identify. Yet.

The Means and Getchell Families. 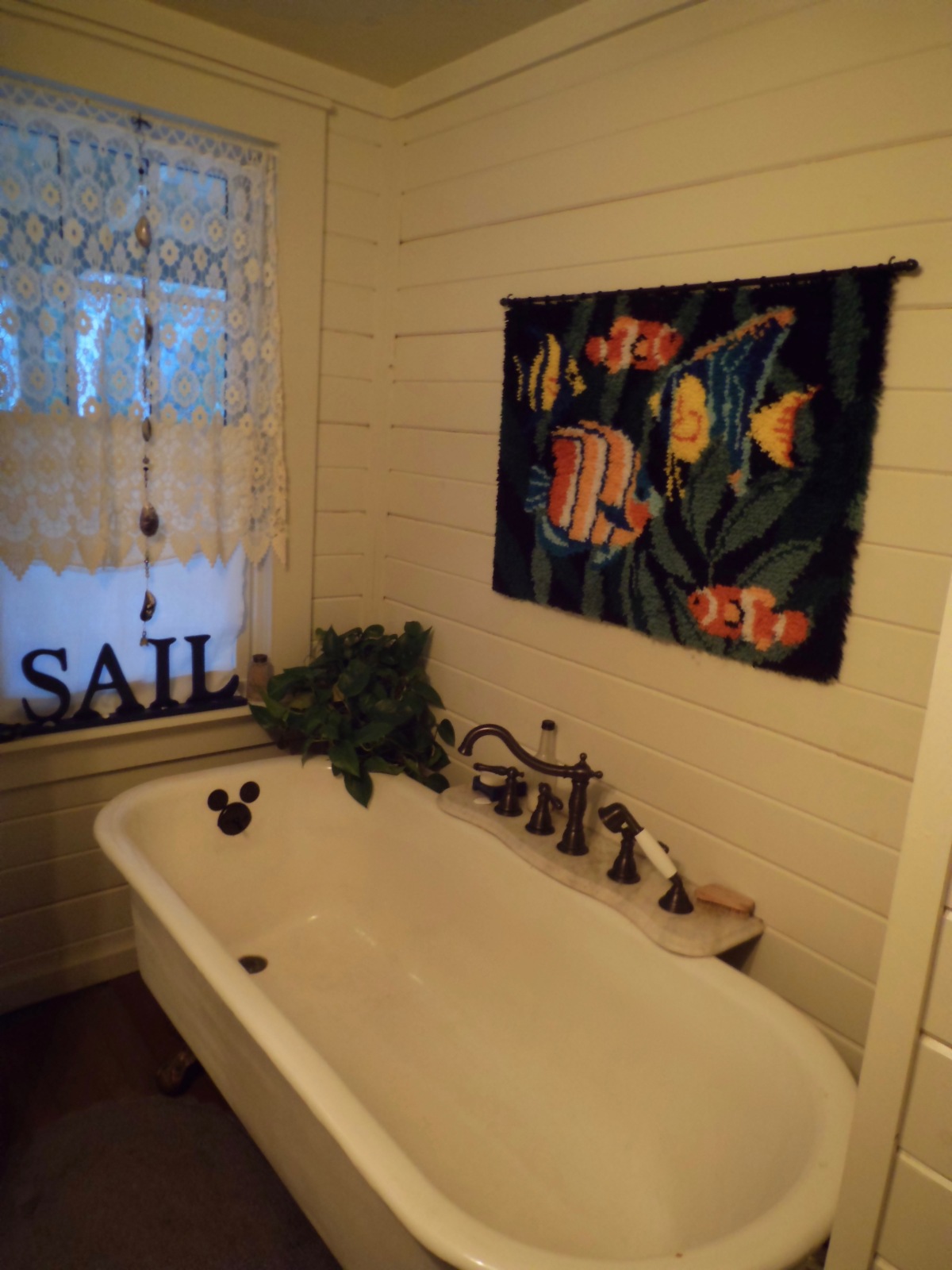 are in my little home. They possess the warmth and love of her life, her daughter Nellie, my grandmother Harriet, my mother Louise. They stayed safe under the care of these women and the house at 24 Broadway. I found it tucked away in the attic. A cotton chair back cover (I think), embroidered with a G for Getchell, became a cafe curtain in my bathroom. 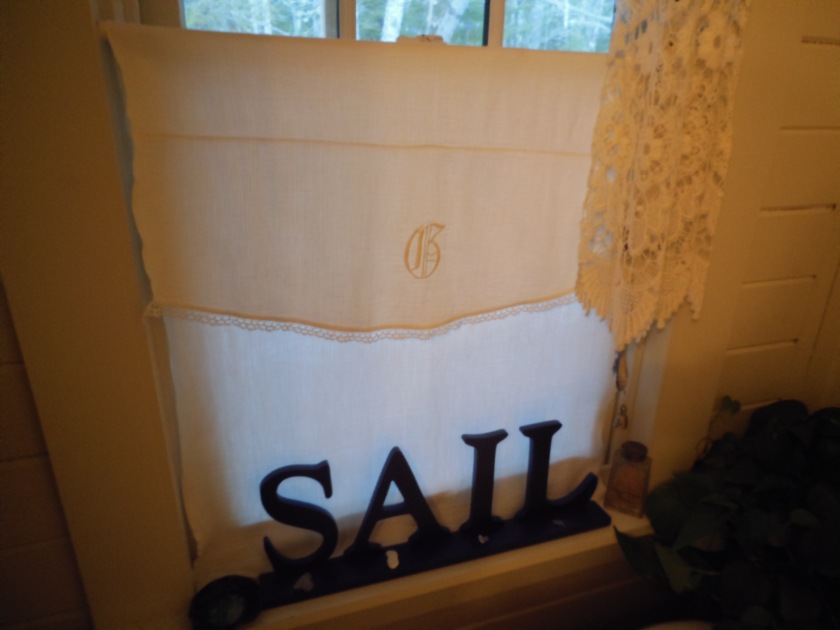 This old blanket embroidered with M J G 12 (Martha Jane Getchell) was on a bed in the house I grew up in and used for more years than I count, likely since 1912. It’s a bit thin and tattered along one short edge but it’s still a warm, usable, wool blanket I treasure. I will tuck it around my grandchildren when they visit. Since Martha Jane Getchell died in 1913, I expect this was a gift to keep her warm during the last year of her life or it was her gift to future generations.

The bathroom contains another story or two. The hooked rug on the wall was a kit purchased by my mother but never used. I found it when I began to sort out the things in the attic. When I went to live with and care for my mother in 2003, I brought the kit downstairs. Mom liked to watch one TV show in the evening so I sat with her and started the rug. It wasn’t long before Mom lost interest in TV. I set the rug aside, about 2/3 remained unfinished. Last winter, I picked it up again and enjoyed finishing it, remembering sitting with my mother.

I don’t know who possessed the early 1900s standard bathtub or the fixture set into a marble shelf. But, I am sure it came from an old downeast Maine home. I found the tub and faucet at a local used furniture store with my life-long friend David, in answer to my vision of an old tub in my home. “It will be hard to find a old tub in good shape Sherry,” he said. We walked into the store and there it sat, as if waiting for us.

In a future post, I will write about the furniture of my great grandparents, William and Nellie Means, found in the sprawling barn at their home, now sitting in my home.

The list goes on. Here are some sample pages from the Cash Book of the Means store. 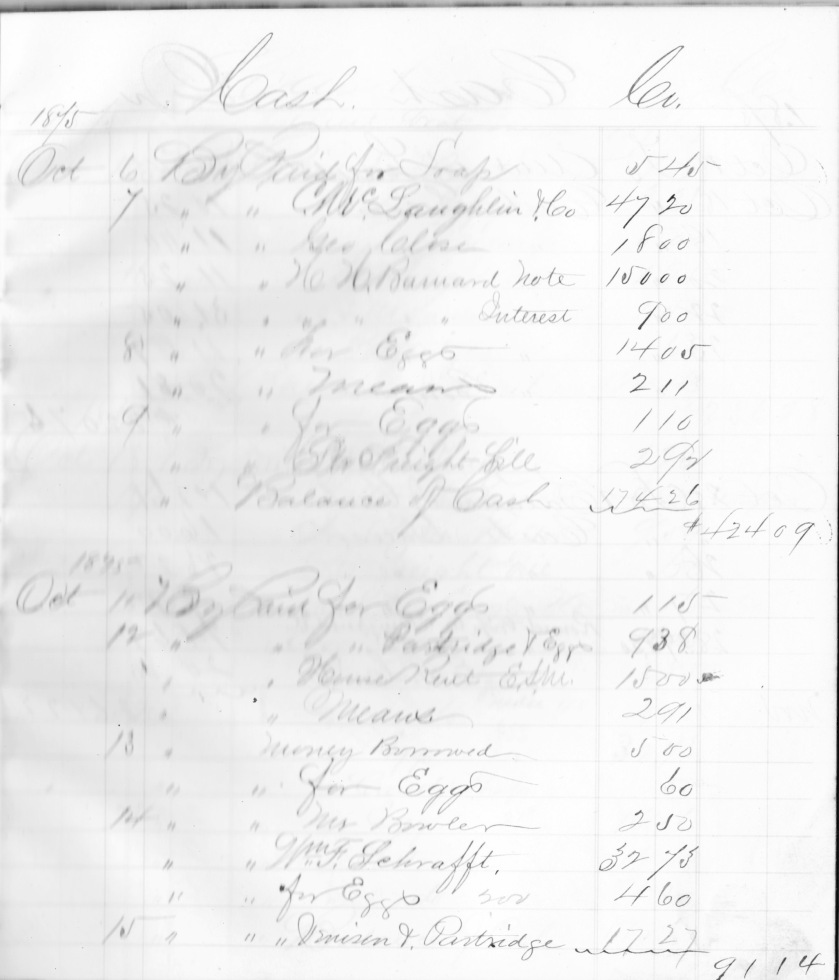 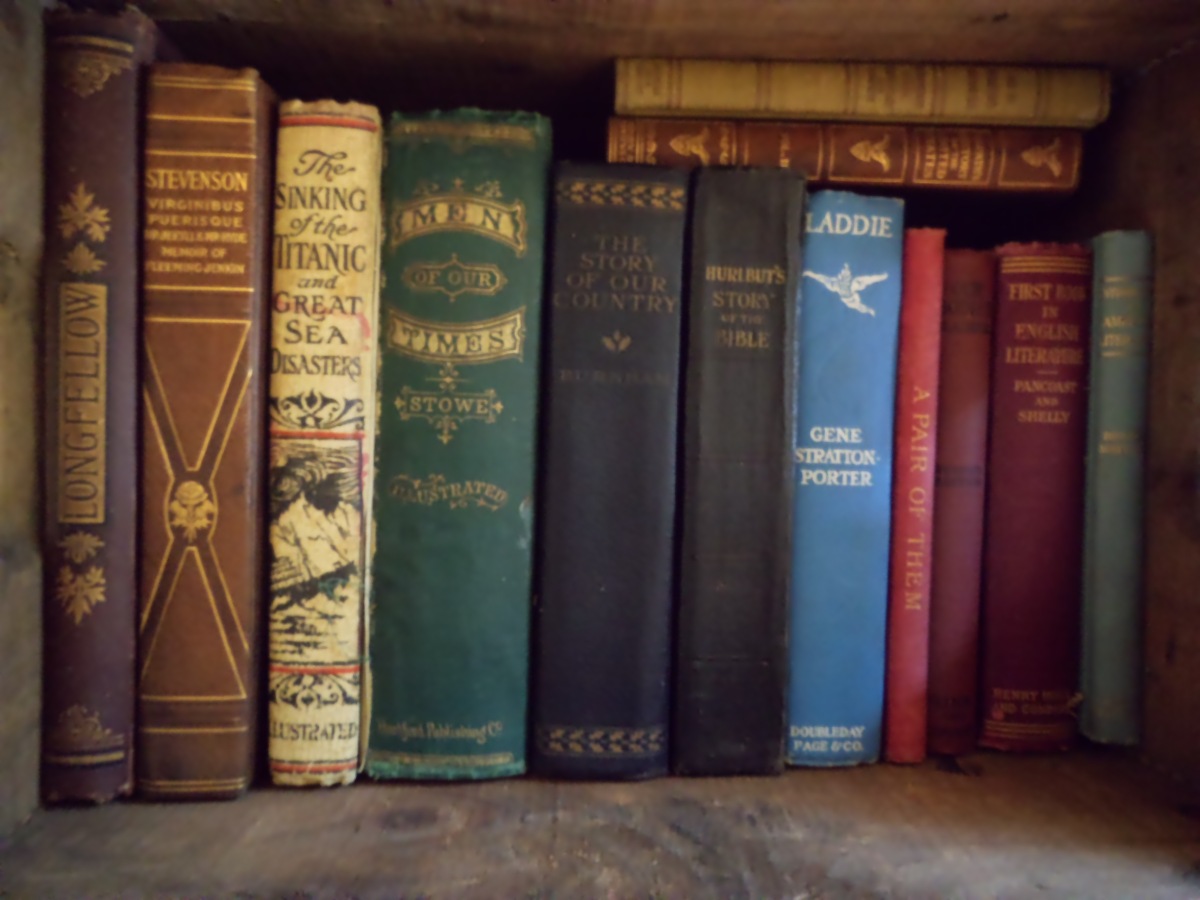 Yesterday, I took his library books out of storage, looking for a place to put them. I live in a small space. I am dedicated to minimizing my possessions. But these books need a home, at least most of them. In 2007, I retrieved them from the attic, sorted out books in good condition, all published in the late 1800s. Some I kept because of their interesting titles. Somehow the attic with its wide boards, beams and rafters protected many old things. When I gaze at the books, I imagine his library that became the sitting room for my family. It had a beautiful fireplace with a burnished wood mantle. The books he collected tell me something about William Gordon Means, my great grandfather.

I shall organize these books and let them tell me where they will go. But, that will be another day. My back is killing me from moving the boxes of books. Thus, my activities are limited today and I share them with you.

Voices of Ancestors
Create a free website or blog at WordPress.com.