Left to right: Dad (James “Gene” Rier), Gordon Ackley and Mom (Louise Johnson Rier). Gordon’s Model A (or is it a Model T?) is in the background. Gordon was the manager of the shop at Rier Motors for many years, as far back as I can remember. He was part of our family. I miss them all dearly, but it is nice to see them together smiling on a sunny day!

After 23 Years in Business, Dad’s Car Dealership Burned to the Ground.

July 23, 1963. The trio publicized the celebration of the 200th anniversary of Machias that year.  Men in town grew beards, sported top hats, and dubbed their group “Brothers of the Bush.” Dad and Phil failed to achieve the 10-inch length of Mr. Goat’s whiskers, the original member of the group.

It was the only time my Dad had a beard. I recall it well because he had dark brown hair but his beard was red, revealing his Irish ancestry.

Dad’s card is on the inside of the announcement. 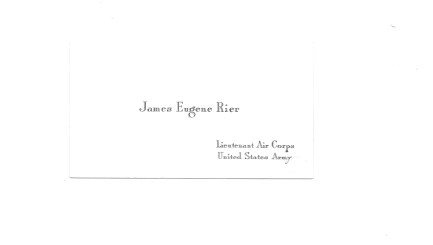 He wrote to my mother on the back:

To Louise, In memory of all the lovely times we spent together. If I ever get home again I’ll drop in. I’m sure a long way from Maine now. With regards, “Gene.”

Dad sounds homesick. He used to tell stories about Texas. He hated the weather, infernally hot to a man from Lubec, Maine. His dating experiences were not good either. He and a buddy took two women to a restaurant for dinner.

“They were so stuck on themselves. Puffy hair and all. They thought their s#^t was ice cream.” Dad said.  After a boring conversation, the two men quietly paid the bill, went to the restroom, and crawled out the window to escape a nightmare double date. I expect they wanted these women to know they were not impressed with their highfalutin attitudes.

Dad missed that woman from Machias, Maine, Louise Johnson. He must have decided to propose as they married less than a year later, February 15th, 1943.

The cars: 1963 Buick Riviera and 1962 Pontiac Grand Prix. Gene and Gordon are in top hats because it was Machias’ 200th Anniversary Celebration, 1863-1963. Lettering on the wrecker and parts van was done by my Uncle Robert (Bob) Johnson. (As told by my brother Jim Rier.)

If any viewers know the first name of the last man to the right in the photo, please let me know.

After 23 Years in Business, Dad’s Car Dealership Burned to the Ground.

Lately, I have spent days sorting and organizing my parents possessions, a collection comprised of years of calendars, newspapers and magazines that tell a story about their lives. In among decades of every greeting card ever received, I pulled out this article from 1985 about Dad’s marine engine business “Rier Marine.” I broke out laughing when I read how he managed to buy a large inventory of engines at low cost. I remembered the stories told at home. Dad bought a train load of Buick engines to marinize for the boats of fishermen and lobstermen.

And 1964 is when Gene’s big break came – the opportunity to buy a large inventory of engines at a reasonable price. The government was after certain specifications in marine engines. Buick had 500 engines for Grumman Allied Industries to put in their Pearson Yachts. The eight engines the government had been given all blew up.

Rier, by this time, had years of experience marinizing Buick engines. He also had a reputation for mechanical wizardry, which was backed up by credentials earned with the US Air Force during World War II. “Well Buick wanted me to check this out [why the engines blew up]. The chief engineer on the project asked me what college I’d graduated from. After I told him Lubec High School, he wasn’t interested in finding out what happened. So I ended up buying the whole mess for very little.”

Dad knew he could marinize the engines, prevent them from blowing up, and make them extraordinarily reliable. He could fix anything, but he was a genius with engines. The chief Buick engineer couldn’t repair the engines and didn’t believe anyone else could, especially a hick from Machias, Maine, who had only graduated from Lubec High School and had no college education. Dad bought 500 Buick engines for a song. The article continues: 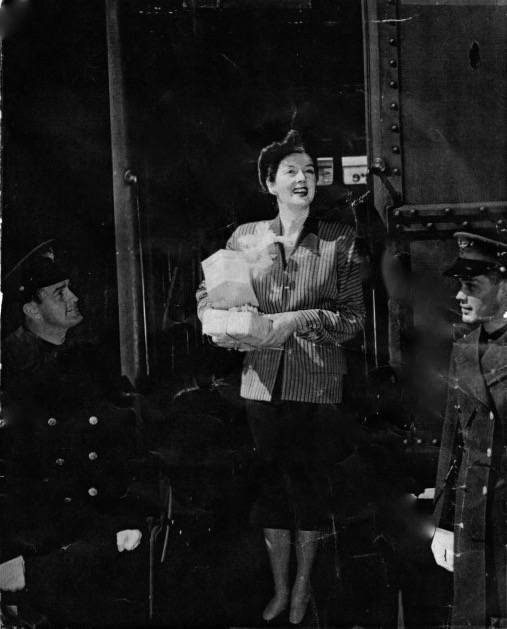 My Dad, James “Gene” Rier, stands on the left staring up at her, smiling in apparent admiration, as she departs the train upon arrival at West Point where Dad was a pilot instructor. In 1935, Rosalind Russell had starred with Robert Young in West Point of the Air, a movie about pilot training in the US Army Corps in the early 1930s. So she came to boost the morale of the military men there during World War II and was met at the train by two (rather handsome) pilot instructors in the US Army Corp.

In 1942, Russell was nominated for an Academy Award for Best Actress in the movie My Sister Eileen, the first of four Academy nominations. In the coming years, she won the Golden Globe for Best Leading Actress five times and a Tony Award in 1953 for Best Performance by an Actress in a Musical for her portrayal of Ruth in the Broadway show Wonderful Town.

According to Dad, greeting Rosalind Russell at the train that day was quite an honor. “She was beautiful,” he grinned, “but your mother is far more stunning.”