A delightful book of short stories and essays, full of humor. I found myself giggling often!

Glenna Johnson Smith writes with eloquence and humor about the complexities, absurdities, and pleasures of the every day, from her nostalgic looks at her childhood on the Maine coast in the 1920s and 1930s, to her observations of life under the big sky and among the rolling potato fields of her beloved Aroostook County, where she has lived for nearly seven decades. The book also includes some of her best fiction pieces.

This book is available through the Maine library system.

“The writing in these essays and short fiction pieces is lyrical and steady, humorous and yet pensive, nostalgic but always optimistic. That could be a description that perfectly fits the author as well. ”
—Cathie Pelletier, Author

“These pieces are funny, profound and poignant, offering an honest, sensitive and nostalgic portrayal of childhood, growing up, marriage, children and single motherhood in Hancock and Aroostook counties.”
—Bill Bushnell, Bushnell on Books, Kennebec Journal

“This collection of essays and short fiction is fun and insightful to read. Her humour is endearing”
––The Miramichi Reader 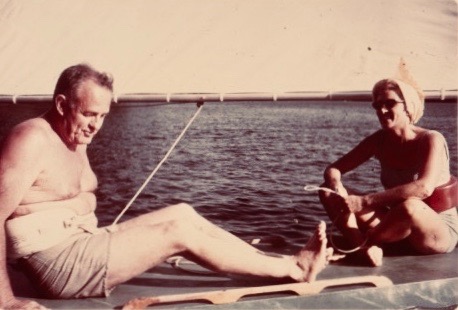 Dad (James “Gene” Rier) and Mom (Louise Johnson Rier) loved to sail on the Sailfish. When I was small, Dad built a sailboat they both enjoyed on Indian Lake.

Dad sailing with my brother David in the Bucks Harbor Race, 1981. This is one of my favorite photos of Dad. Now that’s a happy face!

As kids, my brothers and I spent many hours on the Sailfish, and we continued to sail as adults.

Me sailing on Indian Lake about 2006. 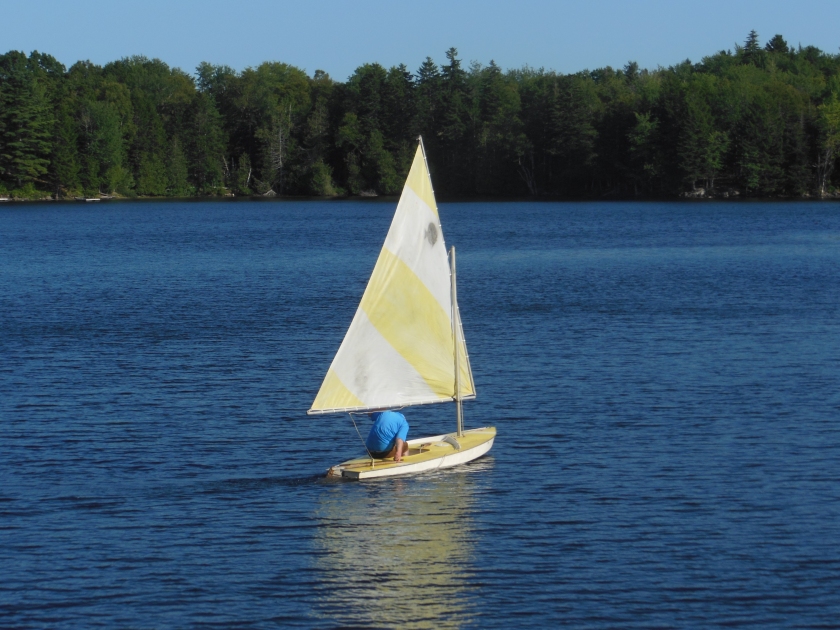 This year, as in other years, the Passamaquoddy Yacht Club taught children ages 10 to 17 the basics of sailing. Wonderful to see! 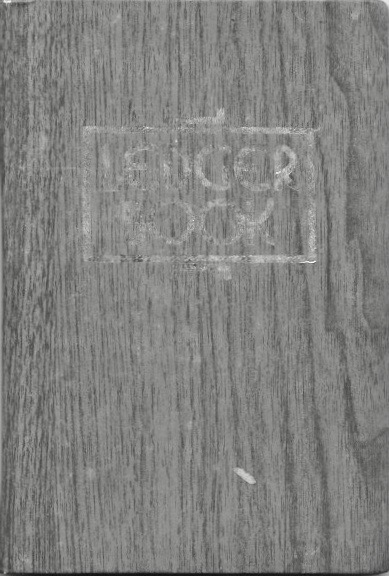 The record begins in September, 1976.

Mom wrote: “1976 was a great summer for trout.” She decided to keep a record of all the fish caught from the Rier wharf, their size, and time of day.

May Total Catch: 21 trout, including one 7″ trout caught by my daughter Monica on May 24th. She was 7 years old.

July Total Catch: 60 trout, including one 9 1/2″ trout caught by my nephew Matt.

June Total Catch: 12 trout, including two 9″ trout caught by me on June 18. On June 29th, two 8″ trout were caught by me and my daughter Monica, and one 9″ trout was caught by my son Jacob, age two!

“All in all a good season “

To Be Continued. Mom recorded all fish caught from the Rier wharf through 1992.

“We are the storytellers– called by our ancestors. In each family there is one who seems called to find the ancestors. To put flesh on their bones and make them live again, to tell the family story and to feel that somehow they know and approve. Doing genealogy is not a cold gathering of facts […]

via “We Are the Storytellers, Called by Our Ancestors” — Heart of a Southern Woman 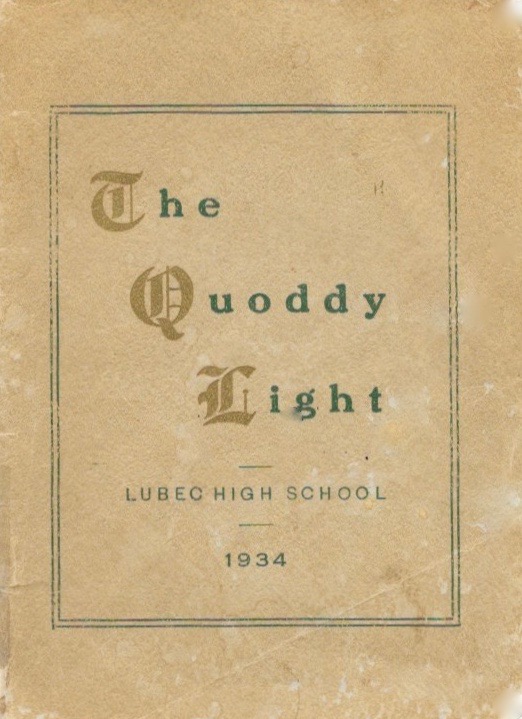 “Here is the prize fighter of the class and that’s not all: He is the life of the class, as well as a certain dark haired Dixie Bell. How about it Dan? May lady luck be with you in the future.

Another graduation photo of Dad in 1934.

As far as my grandmother was concerned Dad’s name was Eugene James Rier. When his birth certificate was registered, the names were written backwards, James Eugene, corrected with an arrow. When Dad entered the military, he was told the arrow didn’t count. He became James Eugene, but was called Gene throughout his life.

This photo was in Grammy Rier’s box of photos. I assume it is one of school children in Trescott or Lubec, perhaps early 1900s from the clothing. Can anyone identify the school, the time period, or any of the children?

The girl sitting in the front row in a dark colored dress, 4th from the left, looks a bit like my niece when she was young.

Photo below circa 1927. Grammy Rier (Elizabeth Keegan Rier) is in the middle with her eldest children, Marion on the left, and Dad (James “Gene” Rier) on the right.  Aunt Marion would be about 14 years old here. Could the young school girl be Marion four years or so earlier? It’s a mystery as yet…

Update: I now know that my grandparents Frank and Elizabeth Rier married in 1911 in Leominster, MA and lived there until about 1925.  If the photo date is around 1902, then it’s possible the little girl who looks familiar is my grandmother (born 1892), or a sister.

Dad was born September 9th, 1914 in Trescott, Maine, the second child and first son of Frank and Elizabeth Keegan Rier. He had an elder sister Marion. As the years went by, Dad had four brothers: Francis (“Babe”), Julian (“Barney”), Paul, Raymond and three more sisters: Evelyn, Patrica and Carolee. In all, Grammy had 10 children. A younger brother, Louis, was born premature and did not survive long. Dad remembered burying the baby in a shoebox in a cemetery in Leominster, MA where they lived when he was young.

Grammy Rier told me that she never intended to have children and was surprised when she was pregnant with Marion soon after her marriage to Frank. “The doctor told me to nurse the baby so I wouldn’t get pregnant right away. It didn’t work. Your father was born little more than a year later.” Grammy had her babies at home in her bed. Sometimes the doctor arrived. Sometimes Frank delivered the baby.

Grammy was a staunch Irish Catholic. I have no idea why she thought she wouldn’t have any children. I could not imagine life without all my uncles, aunts and nearly 40 cousins, most lived in Lubec.

When Dad was little, there was no pretense to dress boys and girls differently, or to cut boy’s hair short. As a toddler, Dad wore dresses and had long, flowing, black hair. “Mother said my hair was too thick and beautiful to cut,” Dad explained.

Dad (R) with his sister Marion (L). Isn’t that a necklace on Dad?

L to R. Frank and Elizabeth Rier in front of the Rier garage in Lubec. Grammy is holding the newest baby boy (Paul) beside Marion and Dad who sported pants and a hair cut by now. Frank looks so much like my Uncle Raymond, the youngest son in the family, it is stunning.

Dad’s education was intermittently interrupted. When he was about eight years old, he became very ill with scarlet fever and spent a year at home recovering. Later, he was often kept home to help his father in his garage and care for his many younger brothers and sisters. As the eldest child, Dad had a lot of responsibility from early in his life. His father was an auto mechanic and talented artist painting and detailing cars. “He could run a line down the side of a car free handed. It was always perfect. I’ve never seen anyone paint like that ever again in my life,” Dad told me.

Dad graduated from Lubec High School when he was 19 years old. He had missed a lot of school growing up so he was older than most students. That didn’t stop him from attaining a perfect score in math (100%) he told me. Dad liked to build (and fix) anything. When he was 20 years old, he and his best friend Bud McCaslin built a futuristic car in his father’s garage. From Dad’s stories, he and Bud enjoyed playing pranks now and again. They hooked up a train whistle to a car, hung out by the railroad tracks, blew the loud whistle just as a car crossed the tracks, scaring the bejeepers out of the driver of said car.

Dad’s first serious girlfriend was Rose. Mom used to tease Dad about Rose. Evidently, Rose ditched Dad and he was bereft  until he met my mother, Louise Johnson, one day in downtown Machias. He said he knew then and there she would be his wife. But, that goal took some time. Mom’s mother Harriet at first objected to Dad. He was from Lubec and a family of little means, and not likely to succeed in life. Harriet went to visit the Rier family for the purpose of investigation and fell in love with the Riers herself. In the years ahead, Harriet would visit my grandmother to sit for a day, taste the bread hot from the oven, and enjoy the hubbub of all the children.

In 1940, Dad accompanied Mom and Harriet to the World’s Fair in NYC. Dad was their escort. Most of one family scrapbook is dedicated to the sights they saw and the memories they made there. 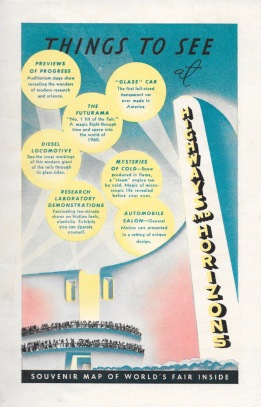 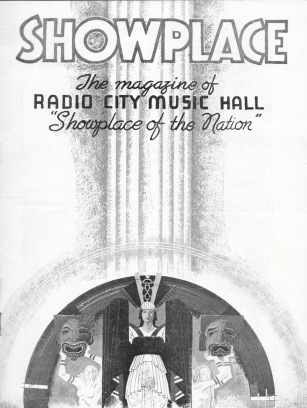 One of the highlights was the precision formation flying exhibitions. Dad was entranced. Then and there he decided to become a pilot. That dream would be fulfilled. In 1942, he joined the US Army Air Corp, went to boot camp in Texas, was assigned to Stewart Field in Newburgh, NY, and trained as a flight instructor. Mom was still living and working in Portland. They decided to marry.

After 23 Years in Business, Dad’s Car Dealership Burned to the Ground. 1971.

Another gift of history from my great grandparents stored in the attic at 24 Broadway, Machias, Maine.  The little magazine looks like it was printed this year, 2017. 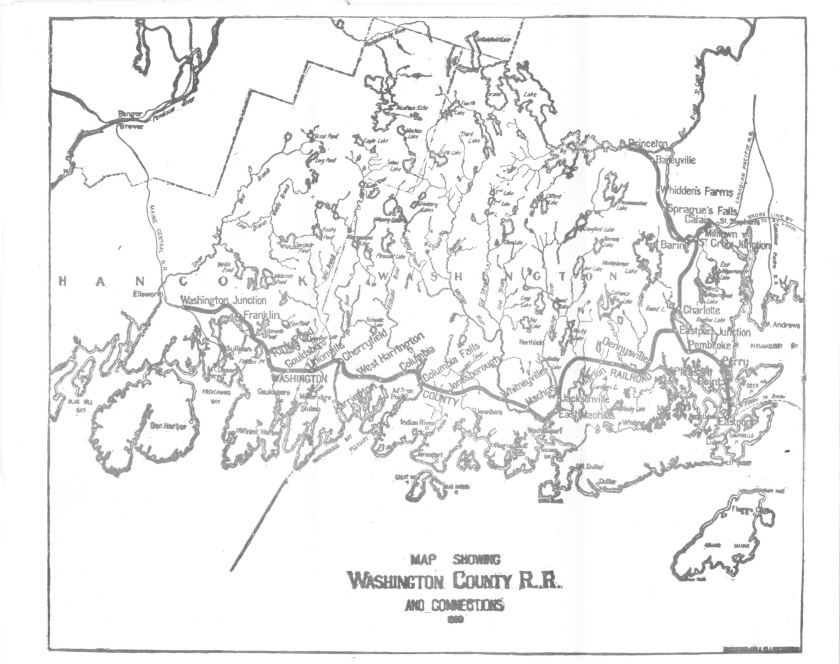 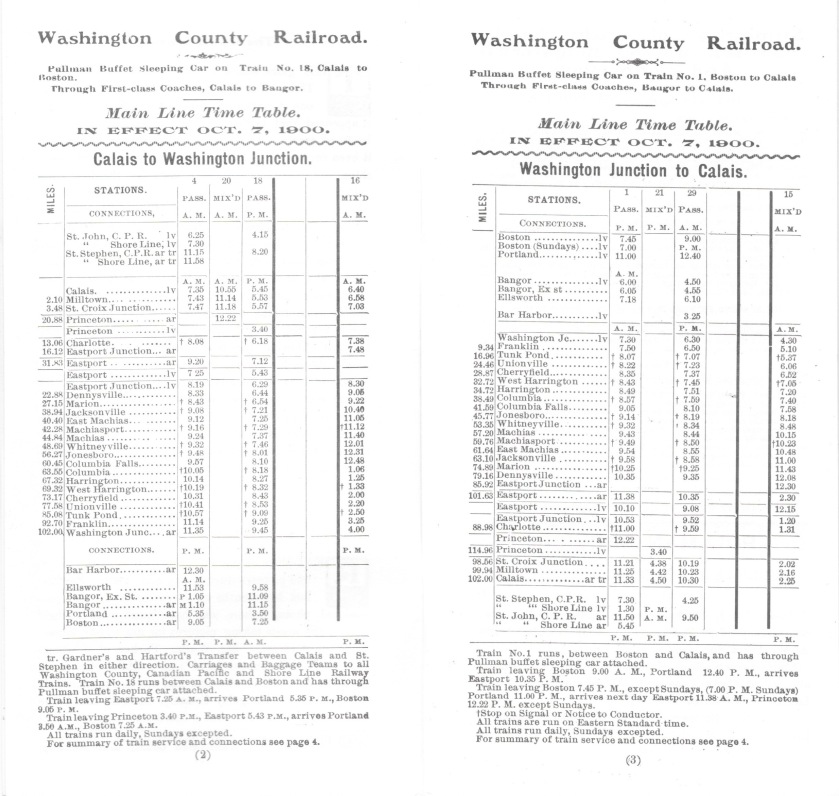 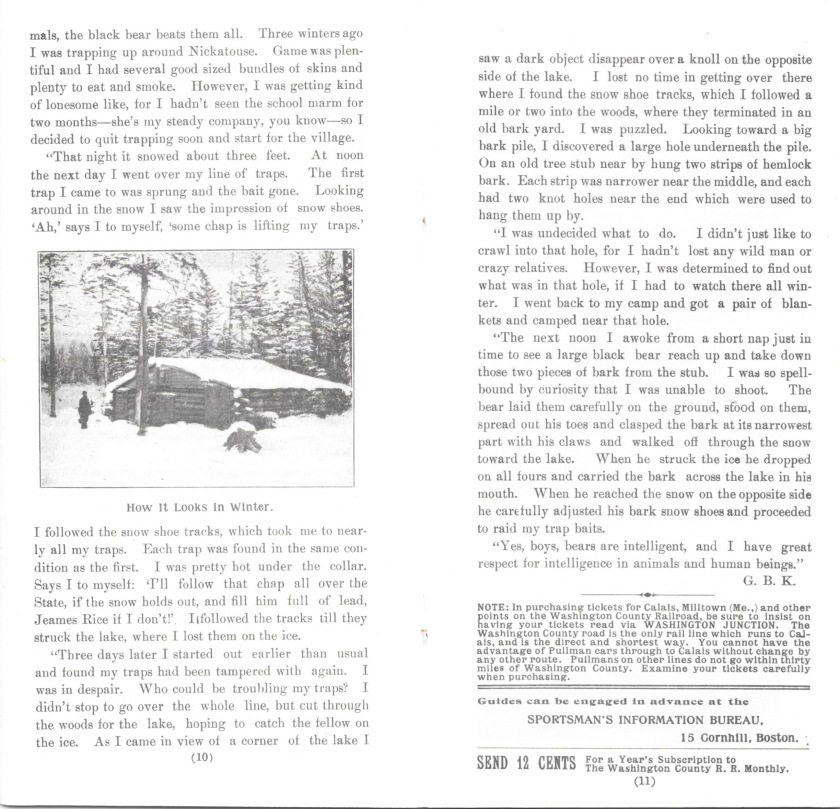 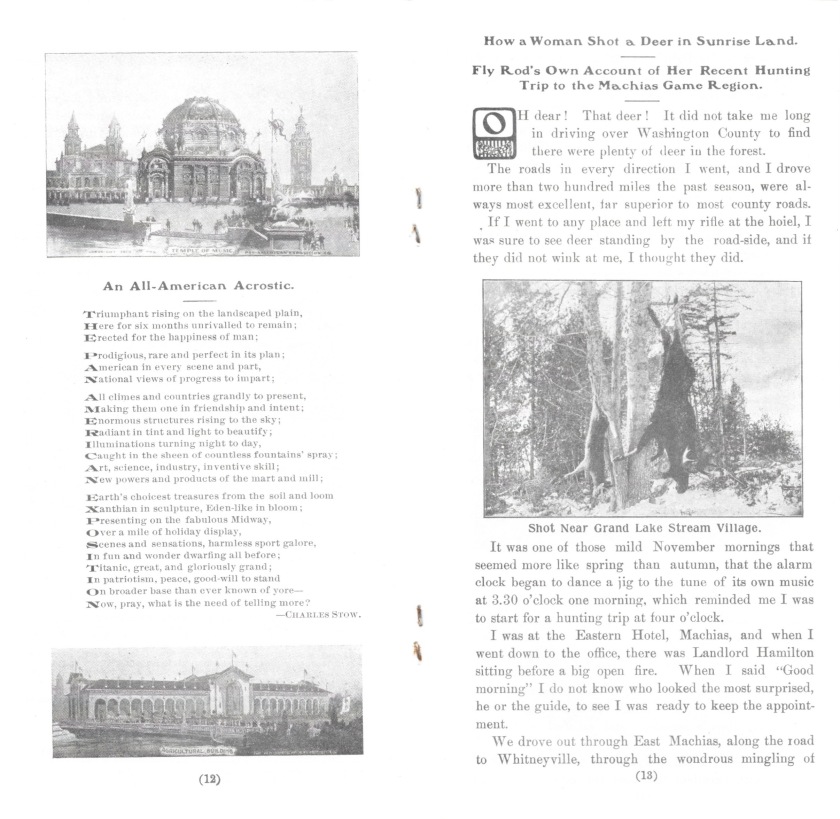 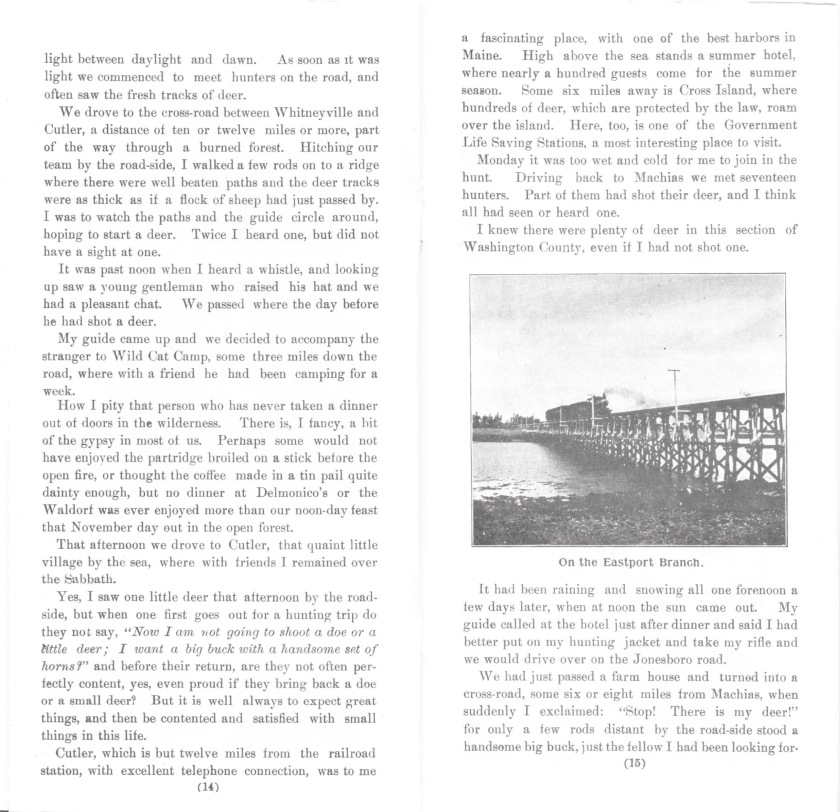 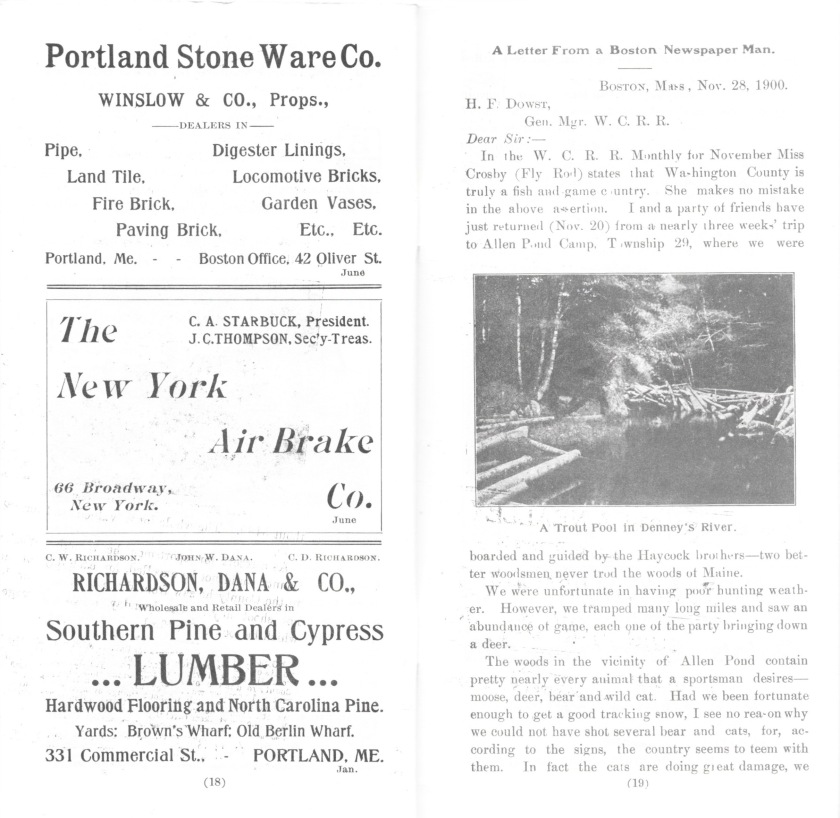 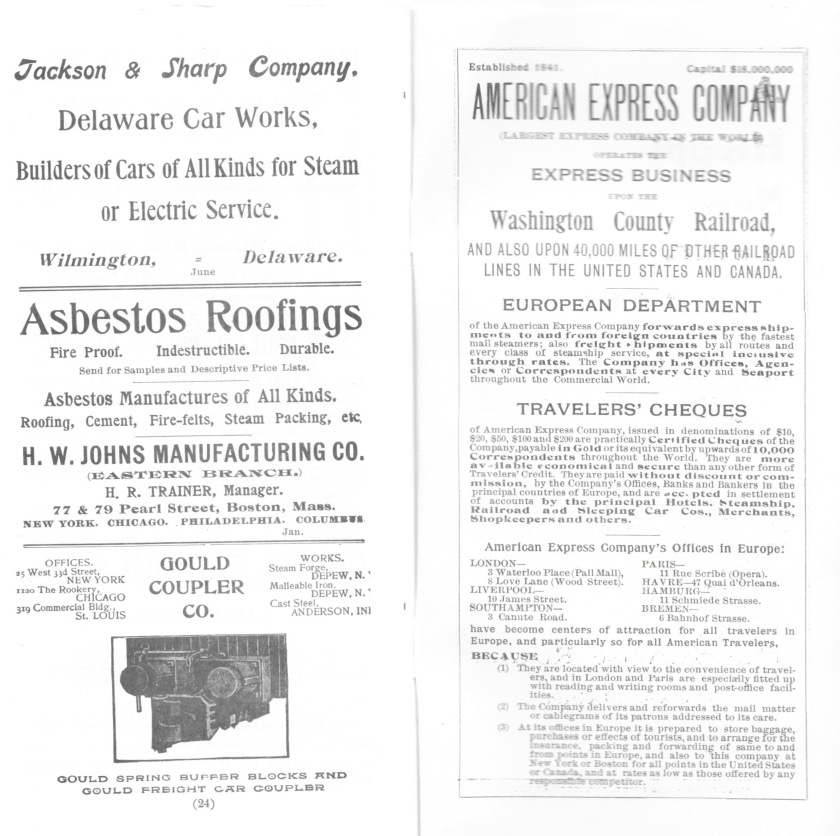 My mother, Louise Adele Johnson, was born in Machias, Maine and a life-long resident. She lived elsewhere just twice in her life, the first when she and her mother Harriet moved to Portland in 1938. She lived there until early 1943 when Mom married. Then she was off to Newburgh, NY for two years while Dad was stationed at Stewart Field Air Force Base. When Dad was discharged from military service in 1945, they returned to Maine and lived in Calais for a year. Dad worked at the mill, saved money to start a business and cut the logs for a small home in the garage of their rented home. At the end of that year, Dad built a log cabin on Dublin Street in Machias where they lived until he finished the building for his business with an apartment on the second floor for them and my brother Jim. In 1949, another son joined them, my brother David. By then, Dad had nabbed the Buick franchise and had a thriving business, Rier Buick Inc.

Portland was an adventure for Mom. Perhaps following the Johnson tradition of horses and harness racing, she joined the local horse club, Abenaki, in 1942. There she made many friends, including her life-long friend Louise Bryce. Their lives became very different: Mom married, had three children and lived Downeast; Louise remained single and lived in Gorham, not far from Portland. All the same, Mom and Louise stayed in touch all their lives. Toward the end of Mom’s life, she couldn’t find Louise. Her letters had stopped. But, Mom sat with the old photo album on her lap, looked at the photos of them together. “We had so much fun together,” she said with a smile, warmed by the memories.

It’s easy to see just how happy Mom was at this time in her life, time spent with new friends and horses. It was her last year as a single woman.

The newspaper announced the new members of the Abenaki club. Mom was appointed corresponding secretary. 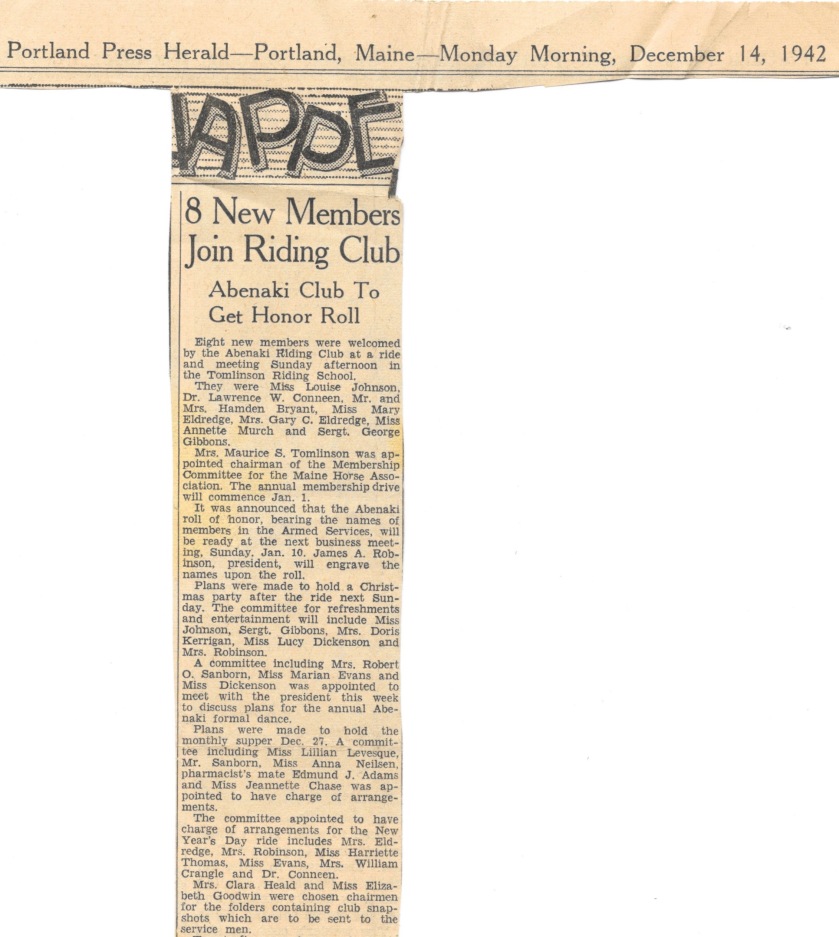 Photo on the right below. Mom and her dear friend Louise Bryce. 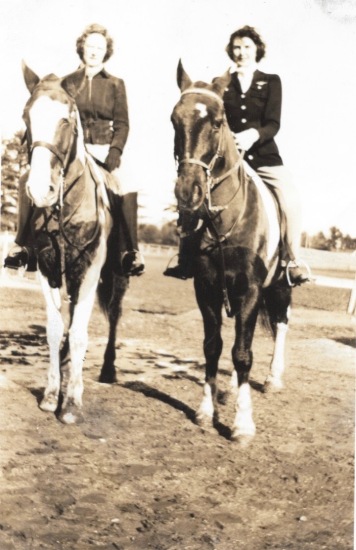 It appears there was some horsing around… 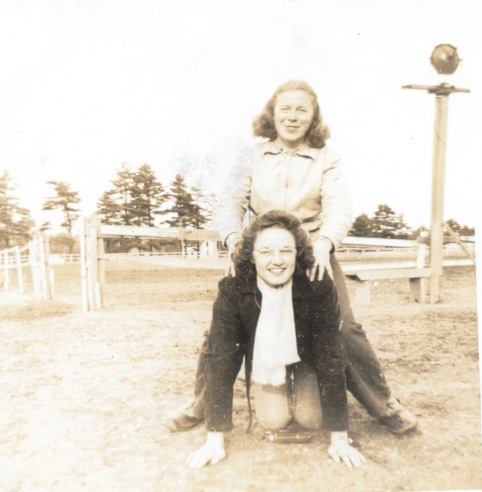