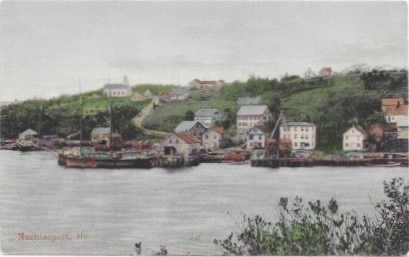 Circa Early 1900s. The back of the post card reads: The Hugh C Leighton Co. Manufacturers, Portland, ME, USA. Printed in Frankfort, O/Main. Germany.  Place the Stamp Here. One cent for United States, and Island Possessions, Cuba, Canada and Mexico. Two cents For Foreign. This side is for the address. 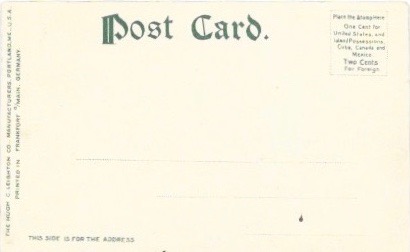 The undivided address side of the post card indicates that it was sold between 1901 and 1907.

My great great grandfather, Otis Witham Means, lived in Machiasport and raised his family there. His home can be found in the 1881 Atlas of Washington County Maine, not far from the seashore, just up the hill from where the Gates House stands now. The home of Otis and Elsie Means was torn down years ago. A neighbor told me the house was expansive, had a wide porch with space to drive the lorry under the roof, and huge rosebushes grew around it.

On the 1881 atlas map, follow the seaside road through the village headed towards Bucks Harbor, turn left, O. Means house is the second house on the left.

“The port” was a favorite place for the Means family in Machias to visit in their lorry in the summer. My grandmother Harriet wrote about it in her 1908 letters.

It was a community effort to build the Machias Gymnasium and Auditorium. At first, the proposal was turned down at a town meeting. The news at the time was saved in an album by my mother:

The idea was first conceived in 1958 by James Rier at a meeting of the Machias Rotary Club. The Machias businessman, an active member of the club, had learned that some building material was available at a fraction of the original cost through a surplus sale of the United States Government. After months of meetings, discussions and just plain hard leg work, the committee arrived at an estimated cost of the proposed building.

A town meeting in Machias, however, turned thumbs down on a proposal that the municipality would spend $25,00 of the building and be responsible for the remainder of the cost.

“Looking back now, I am rather glad that the first town meeting did turn us down, because it only made us more determined to have the building and to do the necessary work to make our goal possible,” Rier said. Members of the committee credit the late Clarence “Tommy” Thompson and Roy Gallager, as being the two spark plus among the group of eager volunteers who worked persistently on the project. The late Warren Hill, of Machias, was credited by Rier as being one of the most important mainstays of the association. “Without the help and advice of Warren Hill, we could never have completed the project,” Rier commented.

The gymnasium was built and became a part of Machias sports, music and the arts for hundreds of students at Rose M Gaffney School and Machias Memorial High School for decades. And, it stands today, serving the same purpose within the community. A proud accomplishment for the town of Machias, Maine.

“A concern for the youth of the area by a group of businessmen, plus a good deal of Downeast ingenuity, resulted in the building of a spacious gymnasium – auditorium. The building has the largest seating capacity east of Bangor.” 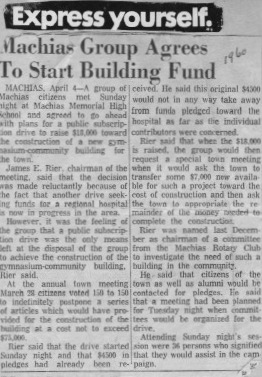