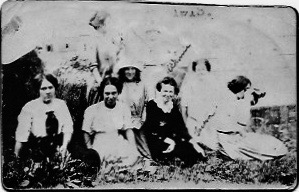 Seven women on an outing. What makes this photo so special to me is my grandmother’s elder sisters are in it: Winnie Keegan (Winnifred; 3d from right sitting) and Teresa Keegan (2nd from right sitting). One other name is written under the women sitting 2nd from left: Kate Knulty? I can’t make out the last name very well.

Winnifred was born in 1887 and died in 1918 at the age of 31, perhaps during the influenza flu pandemic. Teresa was born about 1888; date of death yet unknown. The Keegan women were born in Trescott but Winnifred lived and worked in Lubec by the age of 23. She was a domestic servant in the household of the Trecartin family. My grandmother, Elizabeth Keegan Rier, was their younger sister in a family of seven children.

It’s apparent these women love to be outdoors, one holding binoculars!

Related posts on the Keegan family:

Bringing Your Ancestors to Life: The History of Irish Immigration into Maine.

Visiting the Gravesites of My Great and Great Great (Keegan) Grandfathers. 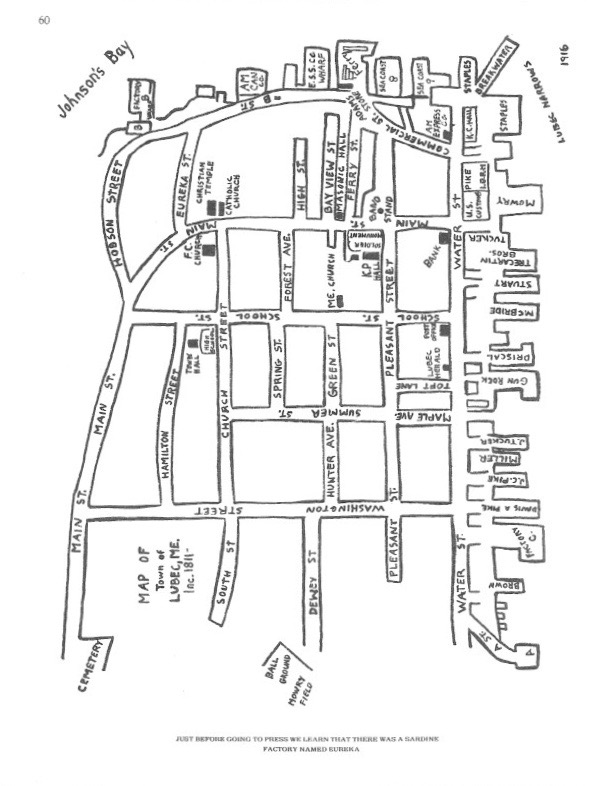 I love learning about the colorful history of Lubec. My great great grandparents Ingraham and Mary Rier immigrated to Lubec from Nova Scotia in the 1870s with their four children. My grandparents Frank and Elizabeth (Keegan) Rier lived most of their lives there. Growing up, I visited Grammy Rier often at her home overlooking Johnson’s Bay, and my aunts, uncles and cousins who lived nearby.

This map is from the book 200 Hundred Years of Lubec History, 1776 – 1976 by Ryerson and Johnson, published by the Lubec Historical Society. This book can be found at the Lubec Memorial Library.

From the book 200 Hundred Years of Lubec History, 1776 – 1976 by Ryerson and Johnson, published by the Lubec Historical Society. This book can be found at the Lubec Memorial Library. 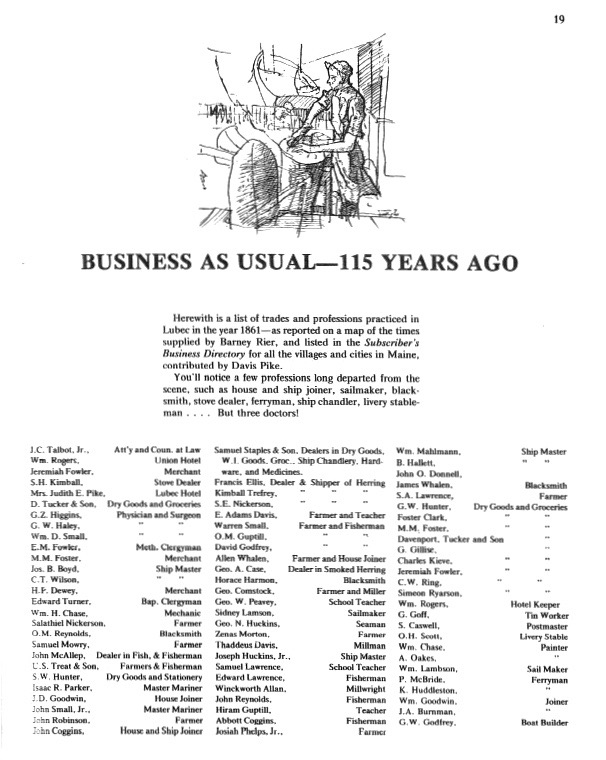 Featured photo of Lubec Village in 1911 is from the Trescott Historical Society website.

As I began researching and writing about my Keegan ancestors, I sought more information about Irish immigration into Washington County. They Change Their Sky: The Irish in Maine, edited by Michael C. Connolly, was recommended in a post comment. Recently, I found the book at Lubec Memorial Library among their fine collection of books on Maine history. It is a delightful book packed with well-researched information about the Irish immigration into Maine. The foreword was written by Senator George Mitchell. An entire chapter is devoted to Washington County entitled: “Ireland Along the Passamaquoddy: Rathlin Islanders in Washington County, Maine.” A portion of the chapter focuses on Trescott, West Lubec, Pembroke and Perry. My ancestors immigrated to Trescott in 1836.

I wondered how they decided to come there, how they lived out their lives. After I read the book, I wrote a summary about the families of my GG and great grandfathers, weaving the genealogy with details from the book, working my way through time up to my grandmother Elizabeth Keegan Rier. Next, I am starting on a bit of historical fiction that begins when Grammy Rier was a little girl, living on a farm in Trescott.

I hope to bring my ancestors to life!

In 1836, James Keegan arrived in the New World from Dublin, Ireland, with his young bride, Elizabeth Moran. Their port of entry is unknown, but many Irish immigrants who settled in Washington County, Maine came into Canadian Maritime ports because fares for passage were half the price into America. James may have worked in Canada for a time as did many other Irish immigrants to save money to purchase land and build a homestead. The couple settled in Trescott among other early Irish pioneers who made permanent homes there before the Great Famine in Ireland began in 1845.

Trescott, West Lubec, Pembroke and Perry attracted Irish families where farming, fishing, shipbuilding, and cutting timber provided opportunities for newcomers, as did the Pembroke Iron Works, a thriving foundry. James followed other Irish farmers who settled primarily in Trescott and West Lubec. They found cheap land, plentiful fuel, and Cobscook Bay offered a means of transport. As early as 1829, three pioneers from Rathlin Island off the Northeast coast of Ireland, Neil Black, Dundan Bradley and Lauglin Black, acquired land along Cobscook Bay. They joined other Irish families there, many from Ulster, fishing the Cobscook coves and farming the land between Trescott and Lubec.

There was a strong sense of community and shared traditions in these small towns and villages in eastern Maine. Often whole families from young children to grandparents crossed the Atlantic together, built homes and worked the land. A pathfinder or pioneering family established a base, sent letters and money for passage to friends and kin in chain migration. In 1844, the year James appeared at the Supreme Judicial Court in Machias to petition for naturalization, he was one of 126 immigrants from Ireland and England. Most of those who specified a port of entry traveled via Saint John or Saint Andrews, New Brunswick or Halifax, Nova Scotia.

This growing community drew the attention of the Catholic Church, already having established a presence in eastern Maine. As early as the 1830s and 1840s, circuit riders from Eastport and missionary priests from Pleasant Point ministered to the Irish flock. In 1852, the Saint Mary’s Catholic Church was built beside a forest of pines in Trescott.

James built his home beside the Saunders Meadow Stream not far from the South Branch of the Cobscook River, west of the Bay. The Murray and Moran families built homes on that stream, close enough to Saint Mary’s Catholic Church to hear the bell ring on Sundays. The family story is that James’ home was built of wood and stone into the side of a hillock. Homes the Irish built were not of thatch and stone as in the home country. Instead they took on the character of their Yankee neighbors as timber was plentiful. The Irish kept their Catholic identity but quickly adapted to their new environment in terms of building styles, material culture, and farming. Irish farmers like James learned new methods and how to use new implements, including using oxen as draught animals, a technique unknown in Ireland. Farms grew a variety of crops from locally obtained seeds: barley, peas, pumpkins, carrots, potatoes, parsnips, garlic, onions, radishes, turnips, cabbages, lettuce, parsley and melons. Corn, beans and squash came from the Passamaquoddy. Cattle provided milk and butter. Apples from seedlings brought from Europe were harvested and cider made in the Fall. Wild blueberry and cranberry abounded. As in the home country, sheep were raised for wool to make clothing.

In 1838, James and Elizabeth’s first child, William, was born. A daughter, Mary, arrived two years later followed by six more children in the coming years: Anne, John, Eliza, James Jr., Catherine and Thomas. James Sr. farmed all his life and was active within the community, serving as the Superintendent of the School Committee for 32 years. He died in 1879 at the age of 67; his obituary lauded his devotion to his family, his Church and his dedication to education.

James Keegan Jr. was the 7th child of James and Elizabeth Keegan, born in 1847. He worked on his father’s farm growing up and well into adulthood, as did his younger brother Thomas. One year after James Sr. died, the Keegan homestead was occupied by his widow Elizabeth, age 74, James Jr., age 32, Thomas, age 29, and his wife Katherine (Kate), age 28. James Jr. likely delayed marriage after his father’s death to assist in caring for his mother and working the farm. He married Margaret “Maggie” Murray in 1886, who lived close by, the daughter of Irish immigrants via Saint John, New Brunswick. James and Maggie had seven children between 1887 and 1895: Winnifred, Tresa (Teresa), James, Mary, Elizabeth (Lizzie), Katherine (Kathe), and Margaret (Maggie). Sadly, James’ wife Maggie succumbed to a bout of pneumonia and died in 1896 at the age of 38 leaving James to care for their children, including their infant daughter. Three years later, James Jr.’s mother, Elizabeth, died at the age of 80. By 1898, Thomas and his wife moved to Lubec with their youngest children Fred, age 14, and John, age 12. where they raised their five children. He partnered with James McCurdy to open the Union Sardine Company while James Jr. stayed at the Trescott homestead with his children.

Life must have been tough for a man raising seven children alone, albeit with the help of his family and neighbors. My grandmother was his 5th child, Elizabeth. I was told that Grammy had to quit school after third grade to work in the sardine camps in Lubec. By 1910, she and her eldest sister Winnifred worked as servants in households in Lubec. The next year, at age 19, my grandmother married Frank Rier, a mechanic from Lubec, in Leominster, MA where her sister Mary lived.

Visiting the Gravesites of My Great and Great Great Grandfathers. James Keegan Sr. and Jr. families.

This is not about a relative of mine but it is a fascinating story and gives one a glimpse into life in Downeast Maine in the 1870s. Captain Tristram Thirlow Corbett from Cutler had taken a load of local goods to the West Indies on the Lena Thurlow. There he loaded rum, sugar, and other products to unload at points along the New England coast. But, Captain Corbett’s wife died in 1873 at Aransas, Cuba.

Published in the Machias Valley News Observer. November 15, 2017. Compiled and edited by Valdine C Atwood. Published in a little booklet entitled “A Brief History of Cutler and Some Interesting Incidents” written in 1976 by the late Jasper Cates and Arlene Dennison.